We would like to control our system. And we will walk through this control in the simple case of intensity control, which is a very straight-forward example, which allows us to understand the basics.

This section closely follow ideas from (Citation: Bechhoefer, 2005) Bechhoefer, J. (2005). Feedback for physicists: A tutorial essay on control. Reviews of Modern Physics, 77(3). 783–836. https://doi.org/10.1103/revmodphys.77.783 . A generic feedback control is seen in Fig. 1. A system $G(s)$ is being controlled with a control signal $r(s)$. The goal of the feedback is for the output of the system $y(s)$ to follow the control signal $r(s)$. The general idea is the following: measure the output of the system, determine its difference to the control voltage to get error $\epsilon$ and use this error signal as input for some control law $K(s)$ that tries to minimize the error signal.

Here we analyze the system in frequency space, where $s=i\omega$. This is a convenient way to analyze control systems. An easy way to measure quantity of such a system is the closed-loop transfer function $T$:

Whereas it is good to have control over an output variable up to a certain frequency, we are in many cases also interested in noise suppression. For example, atoms in a dipole trap experience a heating rate proportional to intensity fluctuations at twice the trap frequency. Only by suppressing the laser intensity noise, you can assure long trap lifetimes and/or ground state atoms. For this reason we consider output disturbances $d(s)$ and sensor noise $\xi (s)$ (see Fig. 2):

What does this mean? There are two things to learn from that. Let’s start with the disturbances, and introduce the sensitivity, sometimes also called noise suppression: $$S = \frac{1}{1+KG} = 1-T$$ We see that a servo with a high gain leads to a low sensitivity to outside disturbances. The trade-off is that the higher the gain, the noisier the output signal. The reason is that with detector noise the control signal effectively becomes $r(s)-\xi(s)$, meaning that we cannot distinguish the control signal from measurement noise. Thus the higher the gain, the noisier the output.

Now before looking at the different systems $G(s)$, we have a look at the control law $K(s)$. The most-used controller is the PID-controller, or very often experimentally only a PI-controller. The P stands for proportional gain, the I for integral gain and the D for derivative gain. Which makes sense if we look at the response in time domain:

In frequency domain the same thing has the following form:

For the control of the intensity, we typically have the set-up that is sketched in Fig. 4. The power of the AOM’s first order beam is dependent on the RF power: $\epsilon_{1st order}\approx\sin^2(P_{RF}/P_{RF_{sat}})$. Therefore the power of the laser beam that leads to the experiment can be controlled by modulating the RF power.

How to characterize the system without PI contol? (“system” refers to AOM+Driver+AOM+Photodiode) The tools needed for that are a function generator, oscilloscope and a network analyzer. All of that can be found in the RedPitaya controlled by PyRPL we use (see Fig. 5).

How to change laser power by modulating RF power

The whole intensity stabilization is based on being able to modulate the RF power that goes to the AOM. In our case, we have a home-build AOM driver that allows for this modulation with a control voltage ranging from 0 to 1V. Most drivers work with a Voltage Controlled Oscillator, a Mixer or Variable Voltage Attenuator to attenuate the RF power, and and an amplifier end-stage, because the AOM usually requires 30dBm, while the VCO outputs something much lower.

Therefore the voltage on the photodiode depends on the control voltage at the AOM driver and the dependency is nonlinear (see figure 6).

The RedPitaya with its network analyzer module, allows us to characterize the setup in frequency space. In the figure above we saw how the Photodiode voltage (laser power) depends on the control voltage on the AOM driver when applying a DC or very low frequency signal. Now we modulate the VCO control voltage with the following: $U_{control}=0.6V+0.01V\cdot\sin\left(2\cdot\pi\cdot f\cdot t\right)$ Can the Photodiode follow this modulation up to arbitrary frequency? Probably not, but how can we measure this? The network analyzer can excite the system with above voltage $U_{control}$ and compare the amplitude of oscillation in the and $U_{Photodiode}$ to measure magnitude and phase. It does so by demodulating the photodiode signal with the same sine that was used for excitation and a corresponding cosine, then lowpass-filtering and averaging the two quadratures for a well-defined number of cycles (see Pyrpl API). From the two quadratures it is now possible to extract the magnitude and phase shift of our system in the probed frequency regime. In the figure below we see that for low frequencies the system follows without phase lag and for higher frequencies the phase increasingly lags as the signal magnitude decreases.

It’s clear that this system doesn’t have any resonances and behaves quiet nicely in the displayed frequency regime. Therefore time-domain tuning methods for a servo like Ziegler-Nichols tuning can be effective and quick. But not every system behaves as nicely as this, so looking at the frequency-regime can be interesting and a way to improve your control, e.g. finding and filtering resonances makes it possible to increase overall gain without sacrificing stability.

After connecting the PI-controller which in our case is also done by the RedPitaya, we close the feedback loop. Now we select some proportional and integral constants such that the intensity is locked to a setpoint we choose. That means that the voltage on the photodetector will be the same as the chosen setpoint. How do we characterize the lock now? How do we know how stable the lock is? How do we know until which frequency noise is surpressed? We take the closed-loop transfer function T using the RedPitaya. With that we can calculate the open-loop transfer function H and look at the sensitivity S.

After measuring T we can can calculate H. As mentioned in the introduction the criterion for instability is $\left|H\right|>1$ for a simultaneously phase lag close to 180°. Be careful that the unit in the figure is dB, which means that $\left|H\right|= 1 = 0 dB$. For low frequencies the transfer functino is ruled by the integrator’s characteristics. Which means high gain, but only a phase lag of 90°.

The interesting regime is where the phase lag hits -180° which happens for ~40kHz for the orange curve and ~90kHz for the blue curve. But both sets of P&I-constants lead to stable behaviour, because the magnitude at that point is below 0dB.
The conclusion of this analysis shows that we could have gotten away with a higher proportional or integral constant and still have a stable system.

At this stage, we can finally analyse the level of noise suppression in the system.

We observe noise suppression for frequencies up to point where the system can react actively, which is about 30kHz.

Another thing to keep in mind: usually your experimental approach is the following: I want 100mW during the first stage of the experiment and 10mW during the second stage of the experiment. For you to be able to choose a good regime of control voltage values, e.g. 0.5-0.7V, where the AOM Driver gain changes minimally, you have to be able to change either photodiode gain, pick-off ratio or initial laser power. 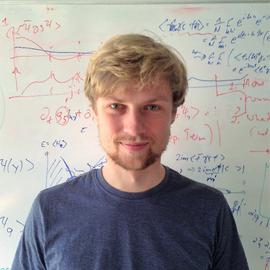 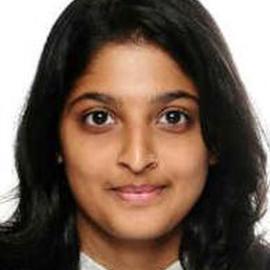 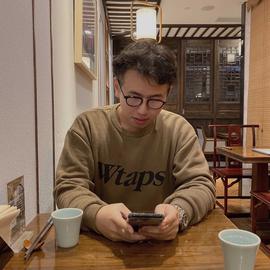 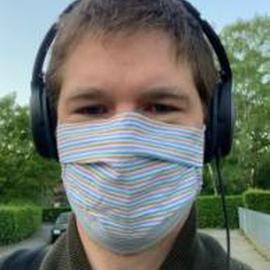